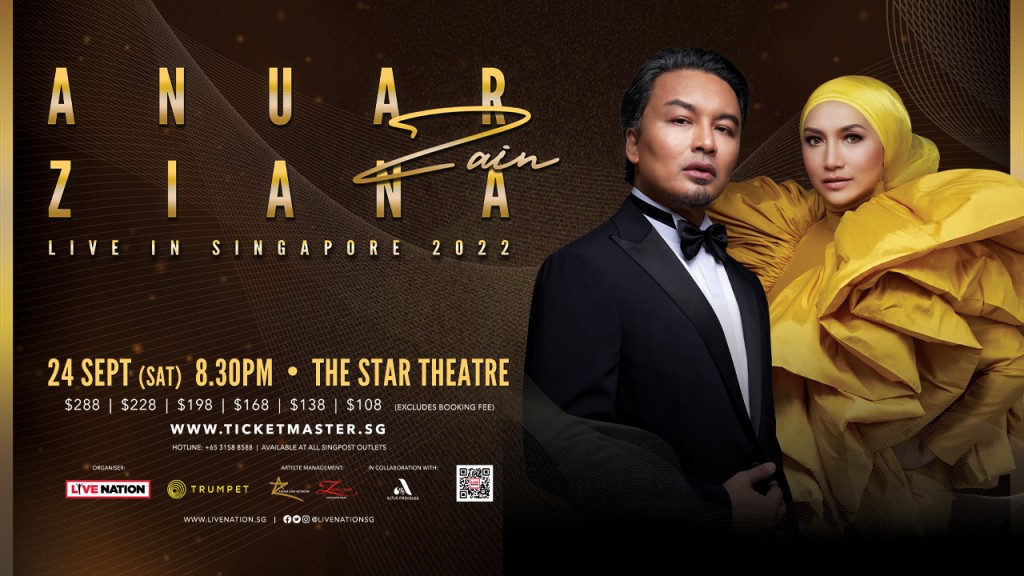 Following a sold-out show in Malaysia, Live Nation Singapore and Trumpet International Sdn Bhd are proud to present an epic collaboration between the sibling duo, Anuar Zain and Ziana Zain, for a one night only performance in Singapore on Saturday 24th September 2022.

The Anuar Zain & Ziana Zain Live in Singapore 2022 concert will be held at The Star Theatre. Although this is not the first large scale concert collaboration with his sister, Anuar appreciates the opportunity and trust given by the organizers. “We are grateful for the trust given to us. We are taking this opportunity to meet and sing for our fans who have been waiting for live performances from us. This concert is going to be a memorable collaboration between my sister and I who have been in the industry for the longest time,” says the Lelaki Ini singer. He added that the aim is an unforgettable concert for their fans in Singapore.

According to Ziana, the concert is a gift for their fans throughout their involvement as artists. “This concert is going to be a golden moment, not just for the fans but also for Anuar and I. We are both thankful to the organizers, Live Nation Singapore and Trumpet International Sdn Bhd for highlighting Anuar and Ziana Zain in a concert at a time where the industry is opening up again,” says the Madah Berhelah singer. Fans can expect the sibling duo to perform some fresh and popular songs that have carved their names in the music industry.

Fans can expect the powerhouse siblings to perform various hits as well as several duets together. So come join the legendary Anuar Zain and Ziana Zain for a night to remember.

Tickets for Anuar Zain & Ziana Zain Live in Singapore 2022 are priced from $108 onwards. There will be an exclusive presale for Live Nation Members on 15 August from 2pm onwards. Please visit www.livenation.sg for membership signup and presale access. General public sale will begin on 16 August at 2pm via www.ticketmaster.sg.