Grammy Award-winning sensation Clean Bandit returns to Singapore for a one-night-only concert on 15 Aug (Wed), 8pm! The British crossover group Clean Bandit is best known for their hit singles – Rockabye, Symphony and Rather Be reaching the #1 spot on the UK Singles Chart. 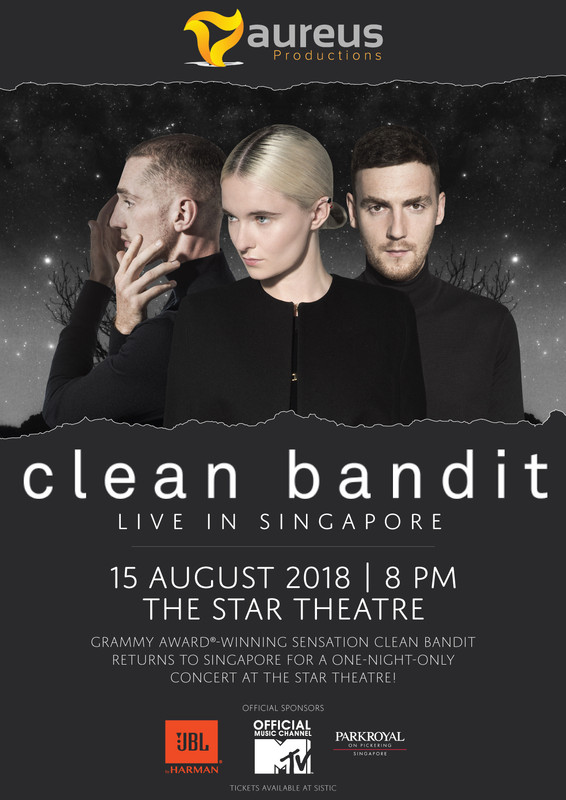 Aureus Productions is proud to present “Clean Bandit Live in Singapore” at The Star Theatre. Aureus Productions, a subsidiary of the Aureus Group, is an initiative aimed at bringing world-class acts to Singapore to inspire locals with a passion for music and to expose them to performances on an international level.

Clean Bandit was formed at Cambridge University in 2008 by a string quartet with a strong classical training background, an influence that has never left them since. Today, the band comprises Grace Chatto, and brothers Jack and Luke Patterson. Together, the trio has achieved a perfect blend of genres: a mix of dance beats, electronic synths, catchy hooks, and – ever true to their roots – elements of classical music.

The British outfit’s breakthrough into the mainstream came with the release of their monster hit, “Rather Be”, featuring the powerhouse vocals of Jess Glynne. Since then, Clean Bandit has been making waves across the globe with its infectious radio hits like ‘Rockabye’ and ‘Symphony’. With over 13 million singles and 1.6 million albums sold worldwide, the band continues to delight fans with its refreshing and unique sound.