LAMC Productions is proud to announce that pop powerhouse group, FIFTH HARMONY, will be bringing their globally successful, The 7/27 Tour, to Singapore for the very first time on April 8, 2017 at The Star Theatre, The Star Performing Arts Centre! 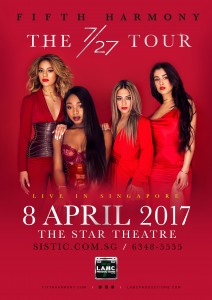 Fans across Asian countries will be able to witness the Fifth Harmony’s dynamic live show filled with songs from 7/27 as well as earlier smash hits.  The 7/27 Tour kicked off in summer 2016, taking the group around the world. The 7/27 Tour promises fans an exceptional live experience to get Harmonizers on their feet with explosive performances of their multi-platinum summer anthem “Work from Home,” along with platinum single “All in My Head (Flex)” and current single “That’s My Girl.”

The release of Fifth Harmony’s sophomore album 7/27, on Syco Music/Epic Records, is the latest in a series of record-breaking accomplishments for the group.  “Work from Home,” the album’s 3x-platinum certified first single, earned Fifth Harmony their first top 10 hit on the Billboard Hot 100, notching the top spot on both the Billboard Rhythmic and Pop Songs charts.

Fifth Harmony’s global The 7/27 Tour began its North American leg on July 27, hitting over 30 cities before heading to Europe.  In 2015, Fifth Harmony released their debut album, Reflection, which debuted at No. 5 on the Billboard 200 and has since been certified Gold. Reflection includes two platinum records, “BO$$” and “Sledgehammer” in addition to the quadruple-platinum success of the single, “Worth It.”  Fifth Harmony boasts over 8 million followers on Instagram, 3.7 million on Twitter and 7.6 million fans on Facebook.