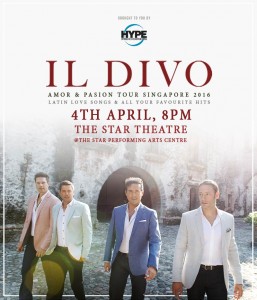 Following the success of their last concert tour IL DIVO: A Musical Affair in 2014, multinational vocal group Il Divo is back in Singapore with their brand new Amor & Pasion World Tour this 4 April 2016!

In their career to date, Il Divo have already proven how the power of music transcends category and defies definition. As the world’s first and most successful classical crossover group, the foursome and their virtuoso blending of operatic technique with romantic and popular songs took the world by storm, pioneering the genre of operatic pop. With 30 million album sales under their belts, Il Divo have collected 160 gold and platinum awards in 33 countries and achieved over 50 number one records. They were also honoured as “Artist of the Decade” at the Classic Brits at the Royal Albert Hall in 2011.

Il Divo, consisting of Urs Buhler, Sebastien Izambard, Carlos Marin and David Miller, have performed in front of the world’s great and good – from President Barack Obama to Her Majesty the Queen. They have shared microphones with fellow superstars from Barbara Streisand to Celine Dion and their sell-out concerts have been attended by Hollywood icons including Tom Hanks and Robert De Niro.

And now with their latest album and World Tour appears certain to bring a whole new level of Latin fuego to the extraordinary Il Divo story, whilst showing how – after more than a decade topping charts around the world – they still ooze with their legendary passion for music & belief in it as an unifying force, and remaining true to their artistic mission.

Amor & Pasion is Il Divo’s latest World Tour – and their most ambitious yet. It is also, they are convinced, their sexiest. The flavours and sultry rhythms of Spain and Cuba, Argentina and Mexico give a nod to the quartet’s beginnings, whilst marking an exciting new chapter in their career as they return to our shores on 4 April 2016 with the brand new concert.

Be captivated and mesmerized by the quartet as they bring you a century of traditional tangos, smouldering boleros and classic mambas including hits like “Adagio”, “The Power of Love”, “Angelina”, “A Las Mujeres Que Yo Ame”, “Besame Mucho” and many more! This is a performance full of fire and passion, sensuality and love. Il Divo like to think its their greatest yet.

This Concert is brought to you by Hype Records Log on to www.facebook.com/HypeRecords or www.hyperecords.com for the latest updates and information.