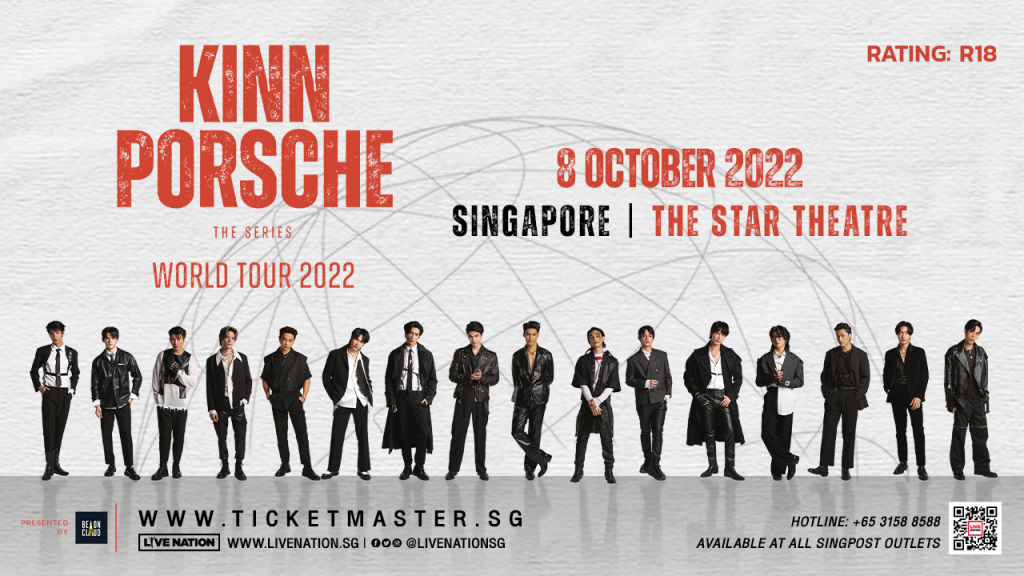 Rating: R18 (Restricted 18) – Content is restricted to audiences 18 years and above. Individuals aged under 18, based on date of birth on show day, will not be admitted. Security checks will be done at the venue before entry.

Live Nation is thrilled to announce that KINNPORSCHE THE SERIES WORLD TOUR 2022 is set to perform in Singapore at The Star Theatre on 8 October (Saturday)!

Get ready to scream your lungs out for “KinnPorsche The Series” when they perform live in Singapore this October. Live Nation pre-sale begins on 19 September (Monday) 10am – 11:59pm. Please visit www.livenation.sg for membership signup and presale access. General public tickets are available starting from 20 September (Tuesday) 10am onwards via www.ticketmaster.sg. Ticket holders will be entitled to various fan benefits which will be drawn at random, to the soundcheck, group photo with the cast and many more!

With the unprecedented response to both “KinnPorsche The Series” and the “KinnPorsche The Series World Tour 2022” concerts in Bangkok, Thailand presented by Be On Cloud Co. Ltd., the stars from the series are now taking their concert tour to their fans across Asia. Phakphum (“Mile”), Nattawin (“Apo”), Wichaspas (“Bible”), Jakapan (“Build”), Worakamol (Jeff), Tinnasit (“Barcode”), Thanayut (“Tong”), Asavapatr (“Bas”), Yosatorn (“Job”), Nititorn (“Us”), Chalach (“JJ”), Nannakun (“Ta”), Nutthasid (“Nodt”), Nakhun (“Perth”), Touchchavit (“Ping”), and Pongsakorn (“Pong”) will be bringing the excitement with live shows in Singapore, Seoul, Manila, Ho Chi Minh City, and Taipei this October, presented by Be On Cloud and Live Nation.

The series has been a phenomenon across the region since its release in April this year and the cast and production have received acclaim from fans far and wide. Each week’s episode has driven the online community wild and the hashtag #kinnporschetheseries has continued to trend since the show’s debut. “KinnPorsche The Series World Tour 2022” debuted with two sold-out shows at Bangkok’s Impact Arena with more than 20,000 fans in attendance.