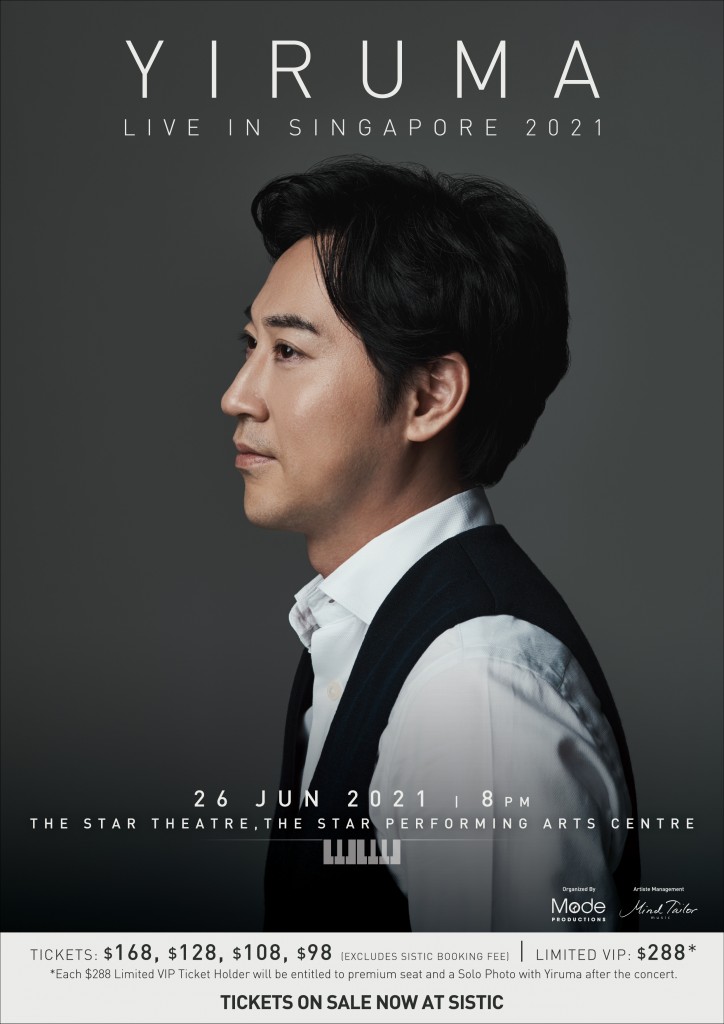 Mode Productions would like to inform that YIRUMA LIVE IN SINGAPORE 2020, originally rescheduled to be held on 3rd October 2020 (Saturday), will now be postponed to 26th June 2021 (Saturday) due to the concerns regarding the COVID-19 situation.

Internationally acclaimed contemporary pianist-composer Yiruma will return to Singapore on 26th June 2021 (Saturday), at The Star Theatre for a brand new concert.

After his successful sold-out concerts in Singapore, Yiruma will return to Singapore on 26th June 2021! Expect to hear his signature classics LIVE such as “River Flows in You”, “Kiss the Rain”, “Love Me” and “May Be”. Yiruma is set to captivate audiences once again with his charming personality and engaging interaction at the concert.

Yiruma is not a traditional pianist by any means. Rather than being stuck in the traditional boundaries of a performer-composer, he continues to extend his musical reach by collaborating with a number of artists, including those from the K-Pop genre, notably 2AM, Ailee, and Baek Ji Young.

Yiruma’s piece “When the Love Falls” was included on the original soundtrack album for “Winter Sonata”, the drama that started the sensation now known as the Korean wave.

To date, Yiruma has released numerous albums that encompass elements of both the contemporary and classical music genre. His videos on YouTube have reached over 400 million views, which is a strong indication of his worldwide popularity and appeal. Yiruma has said that he wants his music to heal, inspire, and remind the audience of love and hope. His simple yet melodic and emotional pieces resonate well with the modern listeners; millions around the world are moved by his music.

Over the years, Yiruma has performed successful tours around the world, from Singapore to China, Malaysia, Australia, Europe, and the United States. In homeland Korea, he holds the record as the classical artiste with the largest audience at a single concert, and the greatest number of concerts by a single artiste!

Don’t miss Yiruma in this one night only brand new concert – Bring along someone special to experience his beautiful music and charisma ‘live’ in Singapore and create a fond memory with the soundtrack to your lives.

*VIP Ticket entitled to Premium Seat and SOLO PHOTO with Yiruma AFTER the concert.
Refer to fb.com/modepdt for more details.
Please check back 3 days before concert in case of any changes.