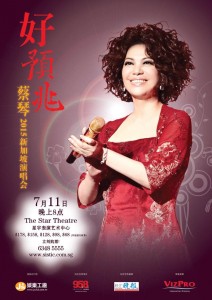 After the success of her Singapore concert “Wonderful Ocean Night” in 2013, Cai Qin is finally returning with a brand new show at the centre stage of The Star Theatre, The Star Performing Arts Centre for the first time.

Well-received in many regions and garnering much-love from fans, Cai Qin display an energetic, powerful and charismatic side of herself in this brand new concert. With lots of energy and innovative ideas, she is the mastermind behind the unique concept of the concert, presenting her best to her beloved fans, giving a spectacular performance that is sure to leave them astounded.

The song-list was prepared with much deliberation, including her classics songs like《你的眼神》,《被遗忘的时光》,《恰是你的温柔》just to name a few. She will also challenge herself with hits from renowned singers such as Feng Fei-Fei’s《流水年华》, 《掌声响起》, Anita Mui’s《亲密爱人》, Liu Chia Chang’s《海鸥》, 《庭院深深》, Li Shou Quan’s《张三的歌》and S.K. Poon’s《寒雨曲》,as well as 《点亮霓虹燈》that she never dared to attempt.

Singing her rendition of other singers’ songs is harder as contrary to common belief. “I need to deliver the songs better than the original singers for audiences to remember my version,” Cai Qin proclaimed. She divulged that her secret is to attempt singing a wide variety of songs to pick the right ones that suit her vocal range and style.

Besides serenading the audience with touching numbers, fans will also see Cai Qin flaunt her slim figure with gorgeous gowns. Along with her mellifluous voice, humor and undeniable stage presence, Cai Qin is bound to impress many.