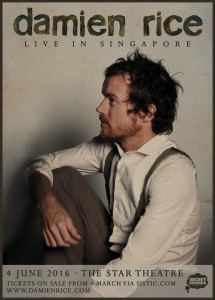 Born in Dublin and raised in Kildare, Ireland, Damien Rice is a singer-songwriter, musician and record producer who plays a host of instruments including the piano, guitar, percussion and clarinet. Formerly a member of the 1990s rock group Juniper, Rice parted ways with the band to work as a farmer in Tuscany, Italy and busked throughout Europe before returning to Ireland in 2001 to begin his solo musical career. His debut solo album ‘O’ (2002), featuring well-loved tracks ‘The Blower’s Daughter’ and ‘Cannonball’, was released to widespread critical acclaim and went on to win the Shortlist Music Prize. Rice’s follow-up album ‘9’ (2006) was certified gold in the UK. After a bout of silence, Rice released his third studio album, ‘My Favourite Faded Fantasy’ (2014), produced by legendary American producer Rick Rubin.

Damien Rice’s debut headline show in Singapore will be a captivating affair, showcasing a mastery of storytelling through his heart-rending lyricism and unforgettable voice.