Elton John – All The Hits Tour 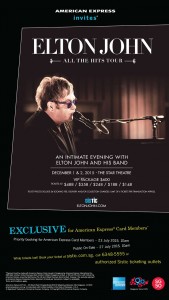 The Star Theatre in Singapore is poised to host one of the world’s best known superstars – Sir Elton John. The legendary singer-songwriter will make a very special appearance with his long-standing Band at the 5,000-capacity venue on December 1 and 2.

Part of his acclaimed “All The Hits” Tour, these concerts are a rare opportunity to be immersed in a curated collection of the best songs from the showmaster who gave us classic hits such as Rocket Man, Bennie And The Jets and Don’t Let The Sun Go Down On Me. The Star Theatre’s intimate ambience and state-of-the-art sound system will make the experience even more unforgettable.

The “All the Hits” Tour features iconic hits and classic album tracks that trace Elton John’s incredible five decade-long career. It includes a selection of songs from his highly-acclaimed album, Goodbye Yellow Brick Road, which recently celebrated its 40th anniversary with a Deluxe Edition.