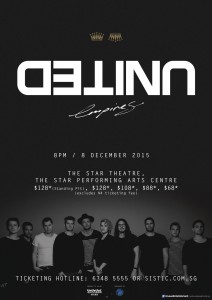 This December, celebrate the season of love, gratitude and faith with Hillsong UNITED as they return to Singapore on 8th December 2015 at the The Star Theatre, The Star Performing Arts Centre with their latest album and concert tour – “EMPIRES”.

In “EMPIRES”, Hillsong UNITED will be performing with new material and also from their repertoire of critically acclaimed songs. The powerful theme of “EMPIRES” explores two different worlds – the world we live in and the mysterious kingdom we cannot see. Encouraging listeners to look beyond this world to the kingdom of God, it seeks to bring across the message that people should be living for the unseen aspects of God’s kingdom rather than the culture that they are immersed in.

Formed in 1998 as part of Hilllsong’s youth ministry, Hillsong UNITED is currently fronted by worship leaders Joel Houston, Jonathon “JD” Douglass, Jadwin “Jad” Gillies, Matt Crocker and Taya Smith. Till date, the band has released 11 annual live albums and four studio albums and has sold more than 1.2 million albums. Writing a new success story in Christian music with their self-penned songs, the worship act has received high praises for their consistently exceptional worship tracks that connect with the people.

Come 8th December, join in the celebration with Hillsong UNITED and be ready to be blown away by the soul and emotion their songs deliver.