Emi Fujita, a name synonymous with pristine vocals, will be performing in Singapore again after an absence of 6 years. 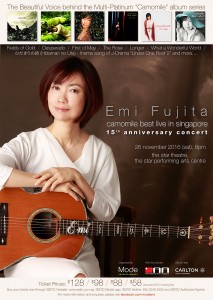 Her last concert in Singapore in 2010 was completely sold-out at the Esplanade Concert Hall. 15 years after her debut, Emi Fujita brings her best anniversary concert to Singapore this year, performing all her best hits from her longstanding career. “Emi Fujita Camomile Best Live in Singapore – 15th Anniversary Concert” will be happening at The Star Theatre, The Star Performing Arts Centre, on 26 November 2016 (Saturday), 8PM.

Be prepared to be enthralled by her pure vocals on favourites from her best-selling “Camomile” album series, a cover of popular western songs such as “Fields of Gold”, “First of May”, “Desperado”, “What a Wonderful World”, “The Rose”, and more. Of course, Emi will perform her breakthrough Japanese classic “Hidamari no Uta”, theme song from the J-Drama “Under One Roof 2”, first recorded when she was the lead vocalist of popular J-pop group Le Couple. The single for the song sold almost 2 million copies, and made Emi Fujita a household name. She also won the Japan Record Award for Excellent Album.

Emi Fujita has been awarded with Platinum and Gold Disc Awards all over Asia, including Singapore, Malaysia, Hong Kong and Taiwan for her “Camomile” album series. The “Camomile” series has established Emi Fujita as a mesmerizing top vocalist with immense depth and soul. Her soothing voice has gained her the reputation of “Sound Therapy” and “Sound of Medicine”, like the stress relieving effect of “camomile”.

Don’t miss Emi Fujita and her acoustic band ‘live’ in Singapore, for an enchanting, relaxing evening of beautiful vocals and amazing music.