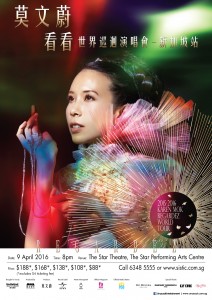 Karen Mok’s last large-scale concert in Singapore was in 2001. 15 years later, the three time Golden Melody Award winner returns with the magical “Regardez” world tour which kicked off in Taipei.

Singer, musician, actress, producer and philanthropist, the multi-talented diva is always game for new challenges. For this “Regardez” world tour, Karen Mok took on the role of concert director, overseeing the entire process of her world tour, from planning to execution.

The concert aims to express different emotions and atmosphere through an interplay of stories, and impressive staging and lighting effects. This includes the use of a thousand laser beams to bring the Northern lights to the Singapore, transforming The Star Theatre into a romantic space solely for Karen Mok and her fans.

Known for her unique style, chameleon looks and signature long legs, the concert will also be a fashion extravaganza as Karen Mok switches between several looks, ranging from a sexy jazz lady to a mythical butterfly fairy with the help of a team of famous designers from Taiwan, France, Indonesia and Hong Kong.

Effortlessly blending fashion with music, coupled with the unique effects, Karen Mok will be performing an extensive list of songs. Get high and bubbly with songs like “Diva” and “Faremewell” and appreciate Karen Mok’s rich and sensual voice as she belts out ballads such “Departures” and “Precious”. Be awed by one of the greatest highlight of the “Regardez” world tour when Karen Mok showcases her Guzheng playing skills in a sauve solo.

Come join Karen Mok on 9 April as she puts up a stunning and spectacular performance curated specially for her fans.