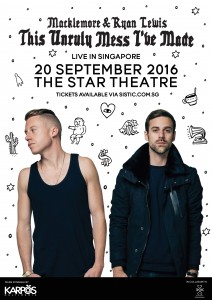 Hailing from Seattle, Washington, the pair made an entrance to the music scene in 2012, breaking their genre’s status quo by way of ‘Thrift Shop’ — the first single off their album ‘The Heist’. Their music is a lyrical recount of Macklemore’s struggles with drug addiction and rehab, as well topics like racism and marriage equality, accompanied by DJ/producer Ryan Lewis’ musical genius.

Their sophomore album, ‘This Unruly Mess I’ve Made’, which was released in February features legendary collaborations with Ed Sheeran and Leon Bridges. On his website, Macklemore describes the unusual recording process they took for this record, “I had to figure out how to use my voice again. So, we went ghost. The Irish Goodbye, into the woods, in the dead of winter. We bought a 1985 Suburban, loaded up some equipment and left town.”

And with that groundbreaking record they just released, we can only imagine what live show experience will come with it. See for yourself.