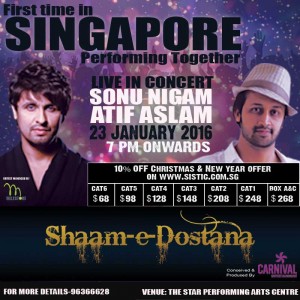 A grand melodious affair honouring singers of India & Pakistan through a show that witnesses two of the best singers, Atif Aslam & Sonu Nigam, coming together for the love of music & harmony.

The major attraction of the show will be Atif Aslam and Sonu Nigam singing their hit numbers from Bollywood movies and individual albums. They will be well supported by dance troupe who will be performing live on the stage. The ambience will be according to the theme i.e. “Celebrating togetherness where singers from both India and Pakistan come together to perform on the same stage”.

Atif Aslam will perform some of his best numbers from his albums along with some of his hit Bollywood numbers. Sonu Nigam will also perform on mix of latest Bollywood numbers with old melodious songs. In the end both the artists will come on stage and will sing in tandem to enthral the audience.