After a 4-year hiatus, Singapore singer-songwriter Tanya Chua is back with her Lemuria 2016 World Tour, taking place at The Star Performing Arts Centre on 10 Dec! 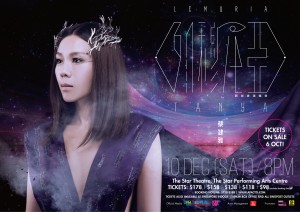 Singapore singer-songwriter, Tanya Chua, is back home with her brand new Lemuria 2016 World Tour! Having released more than 10 albums to date, Tanya was crowned ‘Best Mandarin Female Singer’ for three times at the prestigious Golden Melody Awards. Besides being an acclaimed singer, Tanya composed and produced numerous hits for her albums and many other prominent Asian singers such as A-Mei, Eason Chan, Stefanie Sun and Faye Wong. Tanya’s passion for music inspires her to constantly explore new and creative ways to express her thoughts and style through her music. Her latest album, Aphasia, has once again gain recognition when she received nominations for various awards such as ‘Best Mandarin Album’ at the 27th Golden Melody Awards.

Come 10th December 2016, Tanya’s ‘Lemuria World Tour concert’ is coming to Singapore live at The Star Theatre! The concert theme is inspired by the beautiful tale of a mystical utopia that existed long before Atlantis was known. A land without sickness and violence, Lemuria depicts the pure and original state of the world we live in. Be captivated as Tanya shines in this concert, bringing fans into the magical world of ‘Lemuria’ and uncover the innate beauty of Tanya’s music.