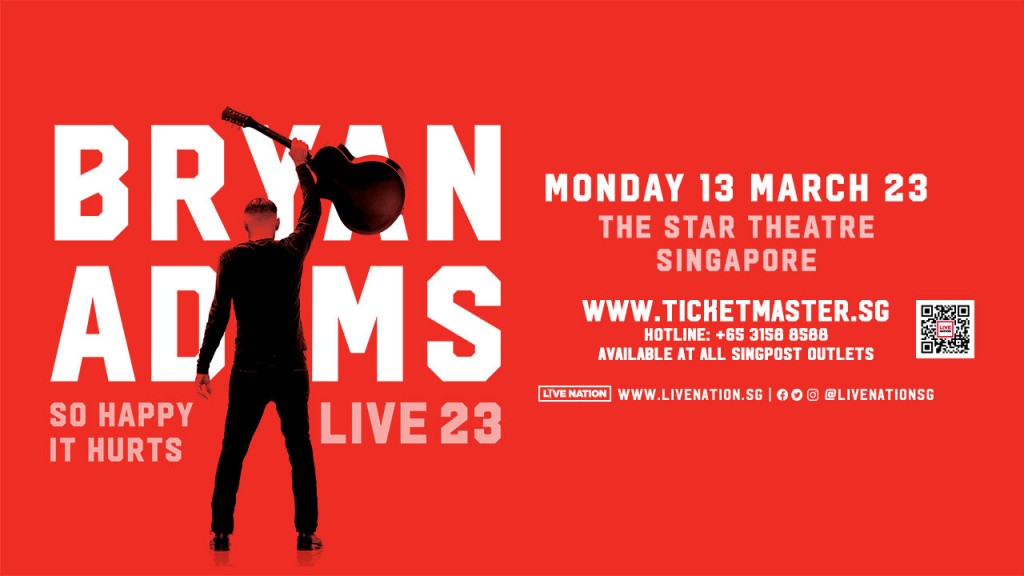 Live Nation is thrilled to announce that Canadian rock legend Bryan Adams is set to bring his So Happy It Hurts Tour to Asia! The tour will take place in Singapore at The Star Theatre on 13 March 2023 (Monday).

Artiste presale will start on 14 December (Wednesday) from 10am to 11:59pm. Fans will need to subscribe to his newsletter on www.bryanadams.com to get the presale code. Presale for Live Nation members will be on 15 December (Thursday) from 10am to 11:59pm. Please visit www.livenation.sg for membership signup and presale access. Tickets to public are available starting 16 December (Friday) at 10am onwards via www.ticketmaster.sg.

Known the world over for his signature brand of feel-good rock music, today acclaimed singer/songwriter Bryan Adams releases the title track from his forthcoming studio album, So Happy It Hurts via BMG.

“The pandemic and lockdown really brought home the truth that spontaneity can be taken away. Suddenly all touring stopped, no one could jump in the car and go,” says Adams. “The title song ‘So Happy It Hurts’ is about freedom, autonomy, spontaneity, and the thrill of the open road. The album of the same name, touches on many of the ephemeral things in life are really the secret to happiness, most importantly, human connection.”

The album So Happy it Hurts, marks Bryan Adams’ 15th release, and features 12 new songs co-written by him. Bryan Adams’ music has achieved #1 status in over 40 countries. He is a Companion of the Order of Canada and has been inducted into the Canadian Music Hall of Fame and Canada’s Walk of Fame.

Adams has garnered many awards and accolades including 3 Academy Award nominations, 5 Golden Globe nominations, a Grammy award, an American Music Award, ASCAP Film and Television Music Award, and multiple Juno Awards among others. He is a recipient of a star on the Hollywood Walk of Fame, the Allan Waters Humanitarian Award for his charitable concerts as well as the Governor General’s Performing Arts Award for his lifetime contribution to the arts in Canada.

Subscribe to newsletter on www.bryanadams.com to get the presale code.
Limited tickets available.

Register for a FREE membership via www.livenation.sg to access the exclusive presale!⁠
Limited tickets available.