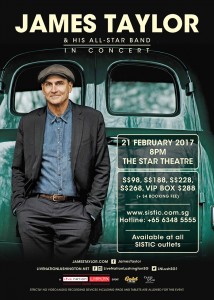 James Taylor’s music embodies the art of songwriting in its most personal and universal forms. He is a master at describing specific, even autobiographical situations in a way that resonates with people everywhere. For more than forty years Taylor has been a compass for his fans, articulating moments of pain and joy, and letting his listeners know that they are not alone.

As a recording and touring artist, Taylor has set a precedent to which countless young musicians have aspired. His warm baritone is among the most recognized voices in popular music and his distinctive style of guitar-playing has been enormously influential. He has sold over 100 million albums throughout his career, beginning in 1968 when he was signed to The Beatles’ Apple Records. His voice has been a constant in a changing world for his first generation of fans and their children.

Taylor’s songs have had a profound influence on songwriters and music lovers from all walks of life: “Fire and Rain,” “You’ve Got a Friend,” “Country Road,” “Something in the Way She Moves,” “Mexico,” “Shower the People,” “Your Smiling Face,” “Carolina In My Mind,” “Sweet Baby James,” “Don’t Let Me Be Lonely Tonight,” “You Can Close Your Eyes,” “Caroline I See You,” and many more. He has earned 40 gold, platinum, and multi-platinum awards and five Grammy Awards for a catalog that runs from James Taylor (1968) and Sweet Baby James (1970) to Hourglass (1997) and October Road (2002). His first Greatest Hits album earned the Recording Industry Association of America’s elite Diamond Award, given for sales in excess of 10 million units in the United States. For his artistic accomplishments, Taylor was honored with the 1998 Century Award, Billboard magazine’s highest accolade, bestowed for distinguished creative achievement.