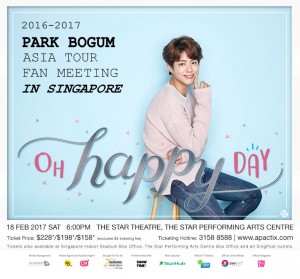 Spend a romantic February with Korea’s hottest heart-throb, Park Bo Gum, as he brings you his first ever fan meet in Singapore, “2016-2017 PARK BOGUM ASIA TOUR FAN MEETING IN SINGAPORE” on 18 February 2017 (Saturday), 6pm, at The Star Theatre, The Star Performing Arts Centre!

The 23-year-old Park Bo Gum debuted in 2011 with the film, “Blind” and landed his first major role in the 2013 drama, “Wonderful Mama”. He has since starred in many popular films and television dramas, including “Bridal Mask”, “Wonderful Days”, “Tomorrow Cantabile”, “A Hard Day” etc. In 2015, Park’s impressive acting in two dramas, “Hello Monster” and “Reply 1988”, gained rave reviews that catapulted him to fame in Korea and an emerging Hallyu star in Asia.

Less than a year later, Park’s role as the charming Crown Prince Lee Yeong in “Love in the Moonlight” won over the hearts of many viewers. A domestic and international hit, the drama sparked off a “Park Bo Gum Syndrome” that further propelled Park’s popularity and solidified his status as a top Hallyu star, in addition to being a versatile leading actor.

In appreciation of all his supportive fans who have made his success possible, Park will embark on a fan meeting tour across 8 countries in Asia, namely Malaysia, Hong Kong, Indonesia, Taiwan, Japan, Thailand, Singapore, and China. “2016-2017 PARK BOGUM ASIA TOUR FAN MEETING IN SINGAPORE” would be his first visit to Singapore. Not only will fans get to hear Park sing and share snippets of his work and life, there will also be segments for them to get up close and personal with the friendly star through games and activities.

Don’t miss the chance to catch Park Bo Gum in person on 18 February and join him for a romantic evening filled with fun and joy!

Tickets priced at $228*, $198*, $158* (*excluding $4 ticketing fee) will be available for purchase through all APACtix channels from 8th December, 10am onwards. To book, log on to www.apactix.com or call +65 3158 8588. Tickets are also available at Singapore Indoor Stadium Box Office, The Star Performing Arts Centre Box Office and all SingPost outlets.

All ticket holders will receive a limited edition fan meet poster and the opportunity to get up-close with Park Bo Gum during the GOODBYE Hi-Touch session. In addition, 200 lucky fans who purchase the Category 1 ($228*) tickets will also get the chance to take a photo with him, in groups of 20. Selection will be conducted through a lucky draw.