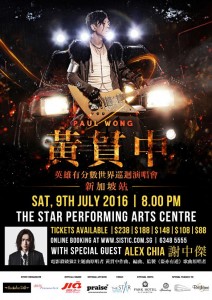 Hong Kong artiste Paul Wong is once again embarking on a Solo World Tour with concerts scheduled for Hong Kong, Taipei and Singapore. Most famous for his role as the lead guitarist for former iconic Hong Kong rock band Beyond, Paul has had a successful solo career since the band’s break-up, while also shining as a song-writer, record producer and actor.

But without doubt, Paul’s true passion is the guitar. An aficionado of the instrument, he has had custom made guitars specially produced for him by manufacturers Fender and Ovation.

Paul will be playing some of his classics from his back-catalogue, as well as some of Beyond’s most well-loved tracks. He will also play some of his newer hits, a treat for his hardcore fans and newer converts alike.

Special guest for the night is Alex Chia, a Singaporean musician who is signed under Hong Kong’s Sun Entertainment Culture Ltd. In 2015, Alex was invited to perform the theme song in both Mandarin and Cantonese for the Hong Kong movie SPL 2《殺破狼2》starring Louis Koo, Simon Yam and Tony Jaa. In the same year, Paul wrote, produced and recorded the song 《盗亦有道》 for Alex.

With millions of record sales and eleven albums to his name, it is clear that Paul Wong is one of the most gifted and popular musicians of his generation, both in Hong Kong and around the world. What is more amazing is to watch these two good friends rock and jam on stage. A true treat for Canto rock fans.