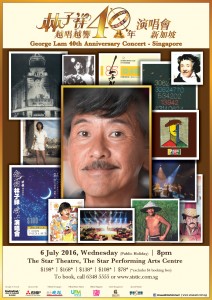 Celebrating 40 years in the music industry, Canto-pop legend George Lam will perform at The Star Theatre, The Star Performing Arts Centre on 6 July 2016.

Lam, singer-songwriter, debuted in 1976 with an English album titled ‘Lam’ and subsequently went on to release several Cantonese and Mandarin albums. Known for his wide tenor range and dynamic vocals, the powerhouse’s ability to master the high notes earned him the title of “Heavenly Vocals” and he was even crowned “The strongest vocal in Hong Kong’s music industry” at the Chinese Media Awards in 2010. Throughout his musical career, Lam not only gained the recognition and respect of his peers such as Anita Mui and Leslie Cheung, he also played a part in shaping the Hong Kong music scene as many of today’s top singers such as Andy Lau, Hacken Lee and Eason Chan were all influenced by his music.

Highly artistic and creative, Lam has written many hit songs such as “Fen Fen Zhong Xu Yao Ni” (分分钟需要你), “Hai Shi Shen Lou” (海市蜃楼), “Zai Shui Zhong Yang” (在水中央) and more. In 1985, he released “Shi Fen Shi Er Cun” (十分十二寸), a mash-up of 20 latest hit songs of that time – something which no one in the music industry has ever attempted before. The mash-up track was extremely well-received, and fellow stars such as Chow Yun Fatt and Leo Ku later followed in his footsteps and created similar tunes.

For the past four decades, Lam and his songs remained highly popular in Hong Kong and he won several awards at the RTHK Top 10 Gold Songs Awards, Hong Kong’s longest-running and most reputable award show. In 1994, in recognition of his numerous contributions to the music scene, Lam was awarded the Golden Needle Award, the highest form of recognition in the Hong Kong music industry.

On top of singing and composing, the multi-talented Lam also starred in many television dramas and movies. In 1982, he won the Best Male Actor award at the 2nd Hong Kong Film Awards for his memorable acting in Boat People.

In commemoration of his 40 years in the music industry, Lam wrote a brand new track “Zuo Zhi Di Qiu 40 Nian” (佐治地球 40 年). In January, he kicked start his anniversary tour at the Hong Kong Coliseum, selling out all four nights.