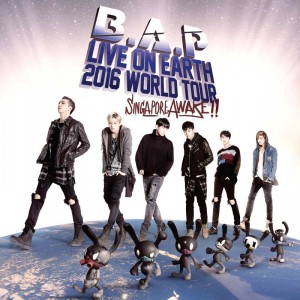 Comprising Bang Yong Guk, Him-Chan, Dae-Hyun, Young-Jae, Jong-up and Zelo, the Korean boy band will return to Singapore after two years, to put up yet another round of rousing performances at The Star Theatre @ The Star Performing Arts Centre on June 27, 2016 (Monday).

Singapore is one of the 15 stops in B.A.P’s world tour, which will begin on February 20. The group has previously brought their full-length concerts to our sunny shores in 2013 and 2014, to the delight of local fans.

B.A.P returned to the K-Pop scene, after a hiatus of one year and nine months with the single ‘Young, Wild & Free’, bagging the Best Music Video award at the KMC Radio Awards.

The group has always set themselves apart from other groups with their musicality, versatility and powerful live performances. With a number of hits including ‘No Mercy’, ‘One Shot’ and ‘1004 (Angel)’ under their belt, B.A.P LIVE ON EARTH 2016 WORLD TOUR SINGAPORE AWAKE!! promises to be an electrifying, out-of-this-world experience.

VIP Ticket holders (Category 1) will be eligible for a Post-Event Hi-5 session with the boys and will get an album autographed by a random member of B.A.P!