Live Nation is thrilled to announce the world’s biggest-selling soprano and legendary GRAMMY® Award-nominated artist Sarah Brightman will bring her highly-anticipated A CHRISTMAS SYMPHONY to Singapore this December. Last year, the international singing superstar entertained her first-ever Christmas tour ‘Sarah Brightman: A Christmas Symphony’, and it warmed the hearts of both fans and critics alike, being named the ultimate holiday event. Given the overwhelming response and in celebration of her favourite time of year, Sarah begins a new Christmas tradition by taking her A Christmas Symphony Tour internationally to Asia.

Accompanied by orchestra and a choir, this beautiful holiday show will feature Sarah performing show stopping renditions of classics from the Christmas canon, along with personal holiday favourites and many of her greatest hits. A Christmas Symphony is sure to be an unforgettable Christmas spectacle during the most wonderful time of the year… 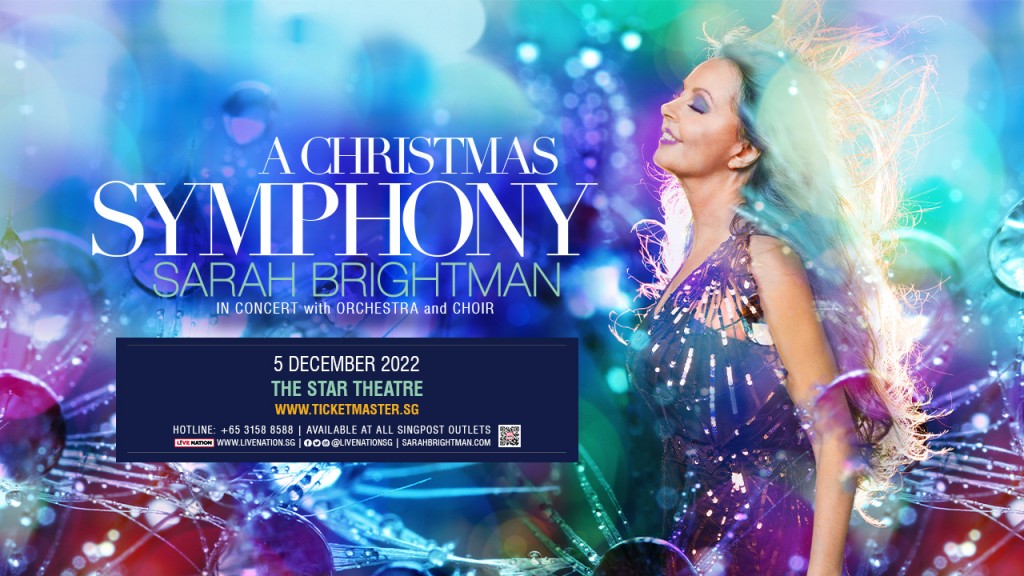 Sarah Brightman, the world’s best-selling Soprano and UNESCO Artist for Peace Ambassador, has amassed sales of more than 30 million, receiving awards in over 40 countries. She originated the role of Christine Daaé in the world-renowned The Phantom of the Opera on both West End and Broadway stages and has performed at such prestigious events including the Concert for Diana, The Kennedy Center Honors and the Barcelona and Beijing Olympic Games. Sarah’s albums Eden, La Luna, Harem, Symphony and Dreamchaser were each chart- topping Billboard hits and were all accompanied by world tours. Her most recent full length studio album HYMN was released in 2018 and debuted at #1 on the Classical and Classical crossover Billboard charts. The HYMN world tour began in South America in September 2018 and concluded in her hometown of London, England in November 2019. Brightman has been recognized for her outstanding contribution to music and theatre with a ‘STAR’ on the world-renowned, majestic Hollywood Walk of Fame, in addition to receiving an Honorary Doctor of Arts (Hon DArt). In October 2022, Sarah will entertain her first exclusive 3-night Las Vegas engagement at The Venetian Resort® with “A Starlight Symphony…An Evening with Sarah Brightman” before taking her annual holiday tour “A Christmas Symphony” internationally to Japan and SEA in November and December of 2022.